Born and raised in Southwestern Germany, Nitzan Stein Kokin decided in her early twenties to move to Jerusalem and earned a Master’s Degree in Jewish Studies from Hebrew University. After her studies in Israel she moved to the U.S. in 2002, where she studied Jewish Education at Boston’s Hebrew College. She lived in the U.S. with her husband and her two daughters until they moved to Berlin, Germany, in 2010.

For over fifteen years, she has taught Judaism and Hebrew language in formal and informal settings alike in Israel, the United States, and Germany. During this period, she also developed an interest for congregational work and leading prayer services and started to consider the possibility of serving the Jewish people as rabbi, and so when the Zacharias Frankel College opened its doors, she was quick to apply and became the first student accepted into the program.

Nitzan’s interest in Jewish Law and Gender Studies sparked her research on the halakhic thought of the first-ever woman Rabbi, Regina Jonas (ordained in Germany, in 1935), the subject of her rabbinic thesis. To be the first graduate of the Zacharias Frankel College fills her with gratification and pride. Thus, she strives to build bridges between the tradition and philosophy of Zacharias Frankel and the conservative movement in the United States.

Josh Weiner (35) is a rabbi, social worker, tour guide and Jewish educator. He grew up between London and Jerusalem, and eventually moved to Berlin with his wife, Noémi, and son Amitaï. After working at the Masorti kindergarten, he discovered and enrolled at the Zacharias Frankel College, and completed his academic degrees at Potsdam University and yeshiva studies in Jerusalem. He speaks English, Hebrew, German and French.

Josh works on a number of educational initiatives in Berlin alongside his studies. He helps coordinate educational activities at the Fraenkelufer Synagogue in Berlin, visits schools and mosques as part of the Meet2Respect initiative, does one-on-one teaching and guidance with young Jews in the city, teaching at the Kreuzberg Kollel and at the home-based empowerment project “Berlin Tisch”, among others.

Josh is passionate about text study, and finding a way to translate the ancient wisdom into a language that is relevant for complex twenty-first century Jews. He also enjoys cooking and hosting meals, and learning from a large variety of teachers on a range of topics. His MA thesis was entitled “A Phenomenology of ‘Kavannah’ in Maimonides’ Laws of Prayer”.

Netanel Olhoeft (26) is continuing on in his studies for a Ph.D. and planning a doctoral dissertation on a halakhic topic at the University of Potsdam. He is also working as a research assistant and lecturer at the School of Jewish Theology at the University of Potsdam, and as a journalist and translator for Hebrew and German. Born in Berlin, Netanel found his way to the Zacharias Frankel College after studying Talmud at a yeshiva in Bnei Brak, Israel, and philosophy at Berlin’s Humboldt University. His MA thesis in Jewish Theology was entitled “Brit Damessek and Chazal – Similarities and Differences between Qumranic and Rabbinic Scriptural Interpretations”.

Netanel sees Judaism as going through a process of creative change in our time. The ever-lasting contradictions between tradition and modernity, between Halakhah and individuality, and between revelation and epistemological progress make it difficult for many Jews to discover a modern, intense and profound form of Judaism for themselves. Through his involvement in the German Jewish community as a tutor for Hebrew and Aramaic as well as for Biblical and Talmudic literature, Netanel wants to help all people he meets to re-encounter the beauty of the Torah and to be able to integrate it in their lives in an individualized way. 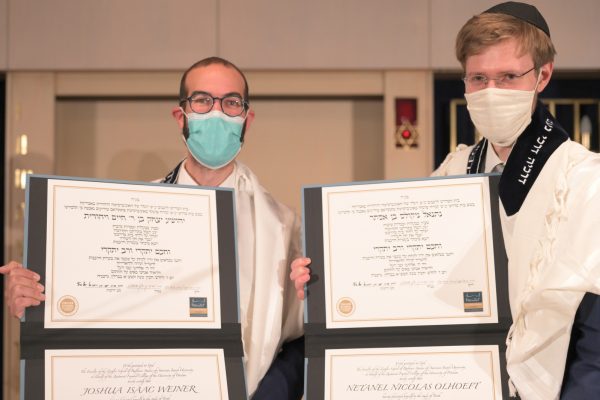 The Frankel College, represented by Dr. Sandra Anusiewicz-Baer, was also present at the Mercaz